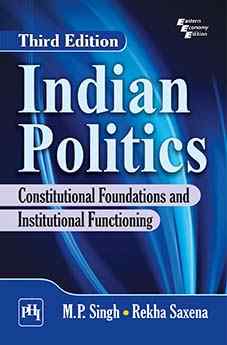 Designed as a standard text for undergraduate and postgraduate students of Political Science and also for the aspirants of Civil Services Examinations, the third edition of the book provides a thoroughly updated account of Indian politics, taking into consideration the Indian constitutional foundations and functioning of the various democratic institutions. It gives a holistic view of the political system of India that includes the State, Government (both central and state governments), the market, and the civil society, including infrastructures like the party systems in the nation and the states that are partly in the civil society and partly in the state.

NEW TO THIS EDITION

• All new developments in the working of the institutions of the various organs of the governments at the Union, State, and local levels in their internal as well as interactional settings.

• Perspective of governance that demands attention to relationships among the governments, the civil society, and the market which have acquired a new salience since the parameter-altering economic reforms in 1991 but have suffered some reverses since 2008, a phenomenon known as slowbalization or deglobalization.

• New phase in Indian politics with Narendra Modi government at the centre since 2014.