Throughout history, the cultural symbolism of ghosts has been a bad omen. These supernatural beings often represent the souls of deceased people who are imprisoned within the land of the living due to unfinished business. In Shakespeare’s Hamlet, the appearance of a ghost (seemingly King Hamlet) has been interpreted in various ways by critics. Even before Hamlet met with the ghost, the protagonist had expressed his discontent with his mother’s marriage to the new King.

“Must I remember? why, she would hang on him,

As if increase of appetite had grown

By what it fed on: and yet, within a month–

Let me not think on’t–Frailty, thy name is woman!–

A little month, or ere those shoes were old

Upon meeting the ghost which claimed to be King Hamlet, the protagonist laments his mother’s actions again. The ghost in the play, therefore, is a catalyst who appears to heighten Hamlet’s emotions even to the point of insanity. Hamlet claims he merely feigns insanity since he believes it would help him gather more information on the events which led to his father’s demise. However, many critics have read Hamlet’s apparent insanity as real and as a consequence of his meeting with the ghost. Some critics have gone as far as to name the ghost a mere hallucination – a mere symptom of a mental disease which was already present within Hamlet.

The ghost is a character which allows for several interpretations of this dramatic play. On one hand, it is a paranormal element in the play since ghosts were not unheard of in theatrical works around the time Hamlet was written. Simultaneously, the ghost can be read as a manifestation of Hamlet’s mental afflictions which sends him into a state of paranoia and drives him to commit murder. This type of enigmatic reading of the ghost has held the attention of and baffled audiences for centuries. This open-endedness which has been bestowed upon the character of the ghost makes the audience immediately more involved within the play. As we begin to doubt, question, and analyze the claims made by the ghost of King Hamlet, we see the play concurrently through two perspectives. The version of the story within which Hamlet is sane and the ghost is real plays simultaneously alongside that version of the play which portrays Hamlet’s descent to insanity.

Multiple possibilities with no definitive explanation leave the audience speculating and create a tension within the play which could not have been achieved without the air of ambiguity. During the time in which Hamlet was brought out, theatrical ghosts merely served the purpose of replenishing order whilst some came to demand a proper burial. The ghost of King Hamlet was a rare vengeful ghost and added to the complexity of the play with transgressions in religious views and on pneumatology.

Some critics may argue that the ghost is clearly not a hallucination and was never intended to be one. This is since three men other than Hamlet – Bernardo, Marcellus, and Horatio – have seen the ghost. However, it is plausible that the three witnesses had merely seen a vision in the dark whilst Hamlet hallucinated its identity. Either way, the ghost remains an enigmatic character within the play and creates various themes within the story through its symbolisms. Here are three themes that the portrayals of King Hamlet’s ghost can be seen to create:

Link to the book details – http://social.phindia.com/5OokXOlW 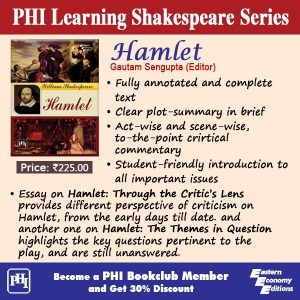