Amongst his most famous dramatic works, the play Julius Caesar by Shakespeare portrays a true historical account. It follows the story of the assassination of King Caesar and the events which followed, leading to a civil war. Gaius Julius Caesar is amongst the most famous conquerors in history. As a critical player in the transformation of the Roman Empire, he was a successful politician and achieved numerous victories in the Gallic Wars and Civil Wars. Historians have hypothesized various theories for the reason behind Caesar’s assassination. Some writers have suggested Caesar’s arrogance towards senators led him to be viewed as a tyrannical ruler. Caesar was also viewed by the public as someone who used his powers to manipulate magistrates and control the election of consuls. Eventually, several senators began to lose faith in Caesar. It was felt that he was compromising the integrity of the Romans’ democratic government.

There had previously been plots hatched against Caesar as doubts regarding his fairness as a ruler began to build up within the minds of Romans. However, prior to his assassination, there were at least seventy men including Marcus Junius Brutus, Gaius Cassius, and Decimus who were conspiring against him. Historians have identified many signs which could have warned Julius Caesar. Before his assassination, a Greek inscription was discovered that prophesied that a descendant of Capys will be murdered at the hands of his kindred. Also, Caesar’s wife Calpurnia had been troubled with bad dreams about the death of her husband. Details related to the politics behind Caesar’s assassination have captivated historians and audiences for centuries. It is the dramatic way in which Caesar died, the fact that he was a prominent ruler in the history of Rome, as well as the various mysteries related to the conspiracy which have all helped this story captivate audiences for centuries.

Most literary portrayals of historical accounts almost always contain historically inaccurate scenes and characters, inserted by the author to add a dramatic effect. Shakespeare’s account contains a few of these. In Shakespeare’s play, the scene in which a soothsayer stops Caesar on his way to the Theatre of Pompey to warn him that the Ides of March has come is said to be an inaccurate account. Also, it is well known that the famous line, “Et tu Brute” was invented by Shakespeare. However, leaving aside a few such untrue elements, Shakespeare’s play is said to be an accurate representation of the historical truth.

Telling the truth about history involves portraying the uncertainties present within the accounts available to us. Shakespeare manages to tell the story of Ceasar through the perspectives of each historically prominent character and their political roles. The fact that each person was a significant figure in history makes this story complex and difficult to portray. Their complex perspectives are highlighted through characters who have been given life-like characteristics. As in real life, the characters harbour flaws such as selfishness, jealousy, and a tendency towards suspicion. The men in the play are lobbying for the integrity of their democracy and are as uncertain of their future as we are about ours. They can be seen discussing amongst themselves their fears about losing Roman democracy to Caesar and the various ways in which they could prevent such a future. As their fears lead to chaos, the events which unfold within the play show that society can never run smoothly like a Utopian fantasy. Humans have a tendency to create conflicts amongst themselves and society moves forward through the resolution of such conflict. This play portrays the instinctual human tendency towards political unrest.

1. Meticulously edited full text of the plays with annotations and commentary
2. Well designed and laid out pages for easy readability
3. Introductions
4. Thorough explanatory footnotes
5. Act and Scene summaries
6. Plot Summary
7. Critical Essays outlining the major themes in each play – this is bound to be an excellent resource for students writing on Shakespeare.

Link to the book details – http://social.phindia.com/y2ffzKJP 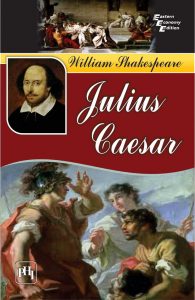