This year the Frankfurt Book Fair was held in the physical format from October 19-23. We have participated in the fair regularly and this year was no exception. Here are a few glimpses of our stall at the fair – Stand No. 6.1 D34. Our Chairman and Managing Director, Mr. Asoke Ghosh can be seen in the pictures. 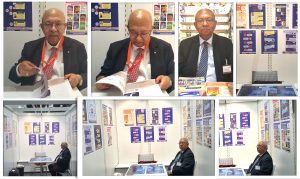 This is the 74th Frankfurt Book Fair. The five-day fair has around 4,000 exhibitors and over 2,000 events on the fair grounds and in the city. The opening of fair was crowned by the Spanish Royal Couple, King Felipe VI and Queen Letizia. Also at the scene were Federal President Frank-Walter Steinmeier Elke Büdenbender, Boris Rhein, the Prime Minister of Hessen, the Mayor of the City of Frankfurt am Main, Dr. Nargess Eskandari-Grünberg and the chairman of the Börsenverein des Deutschen Buchhandels , Karin Schmidt-Friedrichs. The evening’s literary talks came with Irene Vallejo and Antonio Muñoz Molina from Spain, the guest of honor at this year’s book fair.